Polyester Sharia In The Making

Do you enjoy trainwrecks like this as much as I do? Read on. =========================== MY FAITH IN GAWD IS RENEWED BY NEWS LIKE THIS. from the LA Times. God's word, plus static, on Calvary Satellite Network Amid accusations over sex, money and control, Pastor Chuck Smith is about to surrender much of the evangelical radio empire to a man he calls morally unfit for ministry ============================= THE SET-UP WHEN Chuck Smith, founder of the worldwide Calvary Chapel movement, decided to invest big in radio, the Orange County evangelist joined forces with a pastor he trusted. Mike Kestler was one of his proteges, a folksy preacher with a ponytail who had ridden the Calvary phenomenon to a pulpit in Twin Falls, Idaho. Smith had presided at Kestler's wedding. He'd helped Kestler keep his job after a churchgoer complained that Kestler had begged her to run away with him. Now, the pastors would be business partners. Kestler knew how to run a radio station. Smith had
Post a Comment
Read more 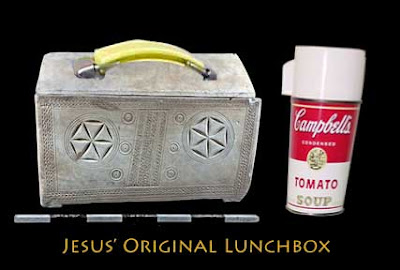 Since We're All Supposed to Give Up Something for Lent®™, let's start with Critical Thinking. Gawd revealed it to me: Jesus' Original Lunchbox. Read the full details here. No Word as to whether the Thermos contents were still hot after all these years.
Post a Comment
Read more
More posts