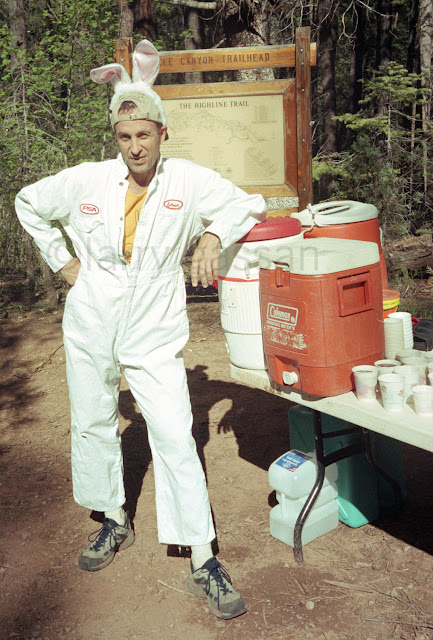 Mr Trail Safety in his element. Photo by Andrea Feucht. Don't hold it agains her. (original post 2001, post-edits April 25, 2013) Now this is probably what you were waiting for . If you get offended easily, please read to the end of the post and get your money's worth. As Bette Davis once might have said..."Unbunch your panties, it's gonna be a fun ride." At the Friday Nite Pre-race, the BIC Lighters were going off, and runners were throwing their shorts on the stage as Linda and Geri went through the pre-race usual. Amidst the lurking Barking Ducks I could hear "FREE-BIRD!" and so on. The race started on Saturday at 0500. Lucky for me, I was still in bed. Several hours later I woke up and made some French Roast and watched the Japanese fleet sink into the Coral Sea. Bummer for them, I had an aid-station to Krewe. I donned ritual garb of white coveralls, with nary a wrinkle or crinkle, and had a solemn vest with totemistic numbers therein, se
Post a Comment
Read more
More posts