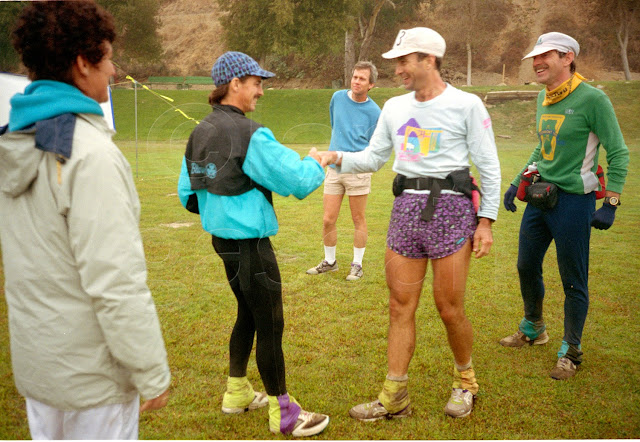 1993 Angeles Crest 100 Mile Finish line at Johnson's Field, Altadena, CA.  L to R: Nancy, Coach Jim O'Brien, Larry Gassan, pacer Ray Deschenes. I repaid Ray by pacing him at WS in 94. On June 13, 2013, legendary coach Jim O'Brien was fired by the Arcadia High School for unspecified transgressions, despite two national titles and a winning record going back almost thirty years. ...O’Brien, now 60, was abruptly fired from his head coaching position at Arcadia. Runners, students, alumni and parents were shocked. O’Brien was not apparently involved in any scandal and, though his style has been described as intense, had no real detractors, other than the personnel associated at Arcadia High School associated with his firing. [from the TrailRunner article]   On July 24, 2013, friends, students and supporters of Coach Jim O'Brien came out and spoke directly to the Arcadia Unified School District Supervisors in an open meeting as to why Jim was important to them, th
1 comment
Read more
More posts