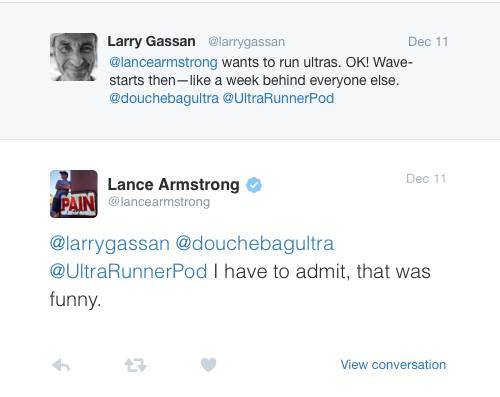 Mr Trail Safety gets Lance Armstrong's attention for 1/10 sec. Lance Armstrong wins a fat-ass trail race! Circle the wagons, Mabel! Lock and load the PowerBars!! Hold up here. 35k is not an ultra, its a sub-marathon of 21.748 miles. Furthermore, its a Fat-Ass, which used to mean "no fee, no aid, no whining". No telling what it means now. He's got a way to go yet. Armstrong was a rip-roaring bastard to Floyd Landis, Greg LeMonde, and anyone that stood in his way. To have him compete in a sport with weak/non-existent doping protocols [because most races can't afford it] is pure parasitism. That said, over the years there have been flurries of excitement as various tri-geeks strap on a 50k with great fanfare, then quietly disappear after their first 50mi flameout. As Bill Rogers commented on a 199 4 CBS "Eye On Sports" Leadville 100 feature: "Its 12+hours, and most of the runners aren't even half done yet. In an Ironman, most would be headi
1 comment
Read more
More posts