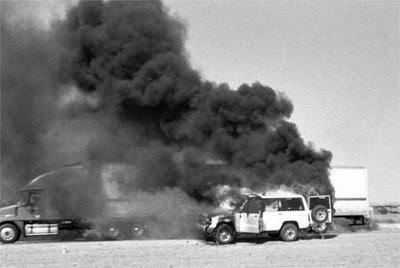 Rush hour distraction, Phoenix AZ, Oct 2005. For some reason it made me think a bit about the country we live in now. Maybe you've seen these numbers, either still or in motion: World War I Woodrow Wilson, DEMOCRAT U.S. deaths-115,000 World War II Franklin Roosevelt, DEMOCRAT U.S. deaths-400,000. Korean War Harry Truman, DEMOCRAT U.S. deaths-36,000 Vietnam War John Kennedy, DEMOCRAT U.S. deaths-58,000. The War in Iraq George Bush, REPUBLICAN U.S. deaths-4,000. This recently surfaced in response to a Joe Conason column in the New York Observer. Of course I answered it. And in honor of the 15 people who'll read this in the next few weeks, here it is, in an expanded exposition. I love it when crap like this bobs up! Lets review the facts, as it is still a "reality-based" world. Let's take down two of these howling wing-nut talking points for starters... World War I : US entry speeded by German torpedos at US shipping, culminating in the sinking of the Lusitania. I
1 comment
Read more
More posts