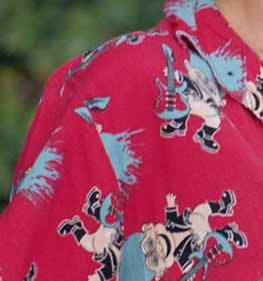 I was summoned for jury duty this past May. I showed up. And here's what transpired: -------------- Greetings, citizen! You'll be amused! amused! that my troll shirt, a pair of wrinkled trou, some beat-up shoes and 3.5 days of whiskers got me off jury duty. As we marched in, we were studied by both attorney teams. There was an abundance of sleek prosperity, poolside tans, expense account lunches. The shoes alone equalled many months rent where I live. The case: a 6 week donnybrook involving Mr & Mrs Mexican Plaintiff suing Toyota and the guy driving their FourRunner on New Year's Eve 2004, after it got hit by a Chevy Lumina. You know, the rolling beer-can. I pleaded Extreme Financial Hardship, [along with 7/8 of the jury panel]. We were recessed. Outside, I was talking to the guy sitting next to me. He'd plead the same. Only he was wearing D&G glasses, had designer jeans, shiny shoes and an oyster chunkette watch. I walked, he didn't. BTW: the costume sugges
Post a Comment
Read more
More posts