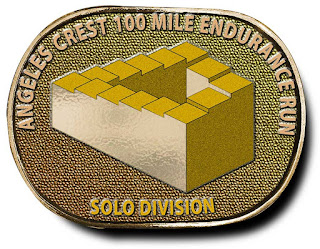 Eventually all AC100 entrants will be in this category The Solo Division was announced with great fanfare after the 2014 AC100 Race. When this concept was introduced, I saw text  suggesting strongly that solo runners would increase each year, and the non-solos would be correspondingly reduced, so that by 2020 it would all be Solo. Of course, then there would be no useless and annoying spectators, right? Boom! Problem solved! Now the runner could compete under Pelican Bay Ultra Club Rules—and not take any aid from family, friends, groupies, or even people he or she owed money to. Doing so would be a lightning DQ.  The incentive for this that you could sign up an hour earlier than the regular scrum .  You think I'm shitting you, right?   in the meantime I'm waiting to see how the AC100 Lottery is going to play out. I predict it will go something like this: it will occur the Tuesday after close of Race 10:35 AM in a remote, unverifiable location somewhere between Wr
1 comment
Read more
More posts