August 25, 1998
Tara And Ethyl Cop Altitude [Part III: The Final Struggle] The following is the Oleaginous Intro by a Patronizing EuroAmerican. He is seated in an overstuffed wingchair on a set decorated to look like an Auld Englishe Country House. He of course drives a Country Squatter Towne & Country [specific town and country available on request] provided by the sponsor. His hands are steepled, and he smirks slightly as he faces the audience. He puts away his racing form as the red light comes on. Take my word for it, because this is radio. "When we last left Tara and Ethyl, they had completed Parts I & II of Copping Altitude. Let's now join our hapless duo as they undertake Part III: The Final Struggle..." The parts of Byron and "Giftshop Turquoise" were faithfully portrayed by Byron and Ms Leslie, in that order. DAY 1, MILEAGE MINORA: "The 38-Special" Ethyl, Tara and Byron are driving the warp-speed-capable Chevy Oxnard. It has two hamsters under
Post a Comment
Read more 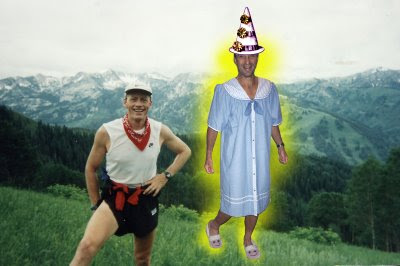 Tara And Ethyl, somewhere between Cascade and Brighton. A Wasatch Fugue In 3 Parts. [In which this being Parts I & II] PART THE FIRST: Getting There Is Most Of The Fun. Ethyl's Gomermobile pulled up to Tara's work. Ethyl was feeling pretty good. The airport was close, everything was styling. Tara is a-bustle and now's set to go. "So Ethyl...when's the flight?" he asked brightly. "Gee Tara, lemme look!" "Happy Faces" turned to "OhShit" real quick, when our two Nimrods discovered that the plane took off in 10 minutes and they were still in the People's Republic of Santa Monica. Exit to the smell of burning rubber. Somewhat later, it's dark outside the plane. And it stays dark until dawn, when Gawd Turns On The Lights. Morning has broken, and it's time for 29 fun miles. One after the other. And so our two hapless runners play CMFM up over Scott's Peak to Brighton. In Brighton they each have a Pepsi, just
Post a Comment
Read more
More posts