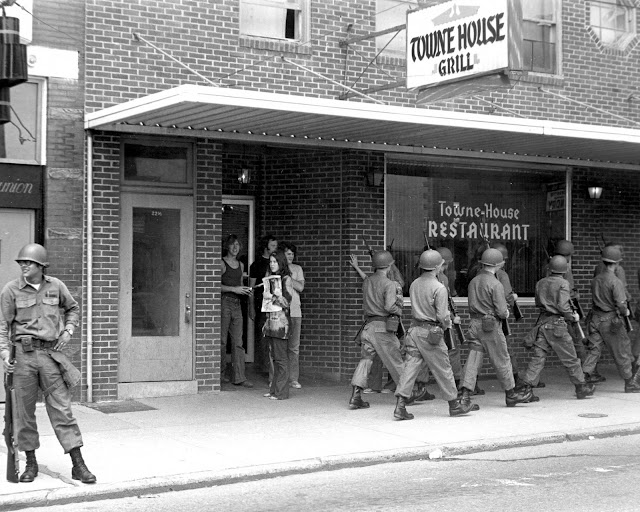 Ohio National Guard in Athens Photograph.This photograph of Ohio National Guardsmen marching in Athens, Ohio was taken in May 1970. Ohio University closed on May 15, 1970. Anti-Vietnam War protests increased in Ohio after President Richard Nixon announced that United States troops had entered Cambodia on April 30, 1970. Riots erupted at many college campuses, including Kent State University, where four students were killed on May 4, 1970. By the end of May, all of Ohio's public universities except Bowling Green State University were closed. The photograph measures 4" x 6" (10.16 x 15.24 cm).  May 4, 1971 I was fourteen, living in Athens Ohio, home of Ohio University; when we got news of the shootings at Kent State. The Kent State shootings convulsed the campus, leading to riots, the closing of the University, and then a 14-day occupation by the Ohio National Guard. The iconic Carl Fleischhauer photo shows a Guardsman standing guard on Court Street under the Va
4 comments
Read more
More posts