Showing posts from January, 2007
Show all

2] The story line is usually dependent on heavy First-World technology. Too bad it looks completely dated 10 minutes after theatrical release.

3] Protagonists and problem solving methodologies are mostly white, who have great teeth and shiny hair. People of any color besides white, and who live outside the 310 area code are vastly under-represented in the sci-fi canon. By contrast, Marin County is mysteriously over-represented. Oh hell! Its more fun to shoot in Marin than Indio, or SW Nebraska.
Post a Comment
Read more 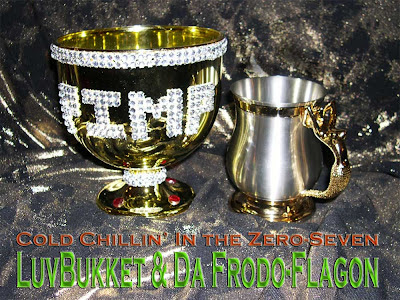 Behold the Majestick Synergies
and Synchronicities of Gawd's Holiday Majestie®™!

For all of you soldiers in the War On Xmas, this is for you.

I was given these gifts by 2 different people, separated by Time and Space, opposite sides of the country...the whole shootin' match. Note the fine detailing on each piece; the subtle lettering on the left [given by Annie G, from NH], and the graceful thumb-stops on the right [received as a White Elephant Gift at my work party in LA].