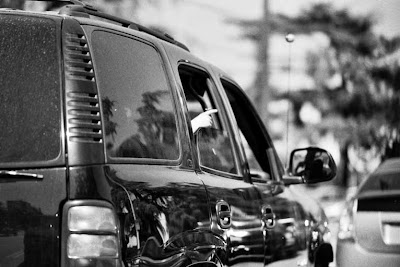 Years of cycling in this strange city and I’ve seen all kinds of weird shit. One of my faves was a chubby Latina backing her Scion mini-brick out of her driveway. She was on her cell, and balancing a plate of tamales with her right hand.

Or the eco-betty driving her Prius, and giving me the stink-eye because I just happened to get in her way as she was coming down an offramp.

Another moron decided he just had to yell at me. I caught him at the light, leaned into the car, and blew my whistle. Loud.

“Man, you scared me!” His eardrums had ruptured, blood was seeping out.

His girlfriend had a resigned look on her face. Yeah, you scared me too. Go fuck yourself.

Do I hate motorists? Of course I do. All of you dicks are not paying attention, ever. Your inattention is now my problem. Shouldn’t be, but is. So it’s generic.

Last Saturday I was at the Silver Lake Farmer’s Market. It’s a sweet little deal. I’d ridden over to do my weekly greens run. Between the annoying guitarist and the flower vendor there were two young enviro activists; guy and girl.

It was my lucky day. The enviro-girl smiled and waved at me. She was a fresh young beauty—cocoa-brown tan, bright blue eyes, blazing white teeth. Did I want to sign a petition, and so on? Help fund an enviromental group, all about wind, solar, the works.

I told her I was on board for all of it—down to the part about riding a bike to work and all. She got excited when I mentioned that; telling me that at Berkeley where she goes to school, everybody bikes.

Ah yes, college. It’s easier then. Just wait until you live here. And since LA is the Bullshit Capital of the Known Universe, people aren’t going to be riding bikes. Especially white people. Ask a Mexican. Not unless its on a weekend, at the beach, with sanctioned recreation-wear.

Image-leaders like movie stars don’t ride bikes on a daily basis. If they did, they’d be chased by paparazzi-thugs on motorcycles. Ed Begley Jr’s movies don’t make any money, so who gives a shit about him?

I’m one of the sixth-tenths of one percent that rides a bike to work here in Los Angeles. These days it’s a 21 mile round trip. It’s also very easy being virtuous when the car is in the shop, laid up with a bum transmission.

So. I asked her what her degree was she going after at Berkeley. She smiled and said “Rhetoric”.

Rhetoric. No shit. I didn’t realize Berkeley had a 13th Century Studies Program. From the loins of what high-caste family had this Eco-Betty sprung? I’ve been working on keeping the rubber side down for so long, I’d forgotten about people like her.

Which reminded me tha my astrolabe has been idle at home for the last several months. I smiled at this young beauty.

“Good luck, and enjoy your summer down here”.

Which was not entirely rhetorical.
cycling eco-betties environmentalism