Why Not Buckles for Beer Miles? 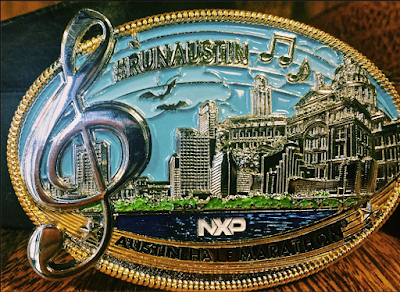 Buckles in ultras used to be seen mostly in 100-mile races. Occasionally they’d be seen at the 50-mile events. Here in California they were given out in some capacity at the long-gone San Juan Trail 50-Mile and Nugget 50-Mile. In recent years they’ve surfaced at some 50ks and marathons. Now they’ve appeared at the Austin TX 1/2 marathon.  You’ve gotta be fucking kidding. First, a little history.Finisher buckles in 100-milers originated at the Western States 100, as a direct lineage from the Tevis Cup Endurance Ride. Not all 100s had buckles for the post-24 hour to final cut-off finishers. Angeles Crest didn’t offer them to the 24-33hr finishers until 1996, after 1995’s winner Fred Shuffelbarger leaned on RD Ken Hamada, hard.

Wasatch had at last count three: sub 24hr, 24-30hr, 30-33hr. I am lucky to have earned the latter two. Because Wasatch is fucking difficult.
AWARDS CREEPThe buckle was a compelling marker that the wearer presumably earned it by hard work. When fewer than 1000 peo…
Post a Comment
Read more
More posts