November 27, 2007
How many times have you wondered how things change from one state to the other? And how many of those times were you a kind and wondered where all that yummy Spam came from?

This is the answer you 've been looking for. 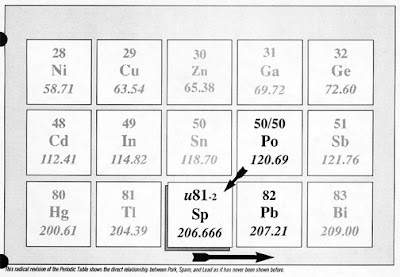 I recently rediscovered this obscure revision of the Periodic Table.
For years it had been conjectured that Spam® was in fact the missing-link isotope of pork. Scientists at D&L Industries Research Lab carefully monitored the projected use-path trajectory, considered its original source, and then followed it to its ultimate atomic conclusion—where it literally turned to Lead.