Showing posts from June, 2013
Show all

Never Bet Against The Angeles Crest 100 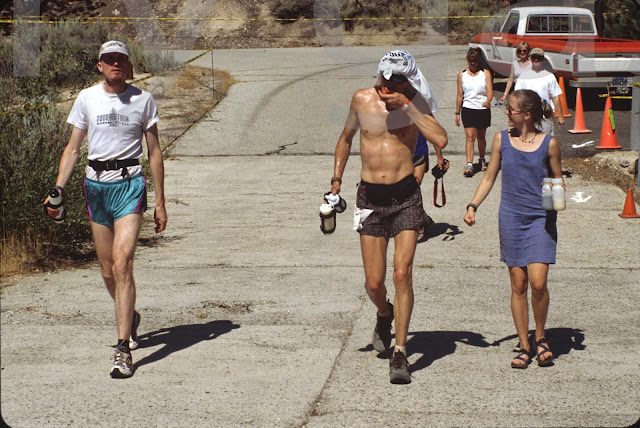 This post concerns the 2000 and 2001 AC100 races. In the course of reviewing the facts, I'd realized that I had merged two races together. Thanks to chats with Jennifer Johnston and Tom Nielsen, I got straightened out. The story is more interesting that way.  1999: PrequelScott Jurek and Tom Nielsen had locked horns at AC in 1999. Everything was ducky up until Chantry, when Mr Murphy starts dropping wrenches in the gears. Tommy caught Ian Torrence on Mt Wilson [79mi give or take], and then Jurek at Idle Hour. Idle Hour. 81 miles, in a Dark Hole in the side of a mountain. That is a hard place to get served.


I think this was pre-packet radio days, and Ham-radio transmissions sometimes got lost or delayed bouncing off the canyons. There are 2 additional checkpoints, but nobody is quite sure where he is.

Or it seemed that way then. David Emmons, who was manning the Millard Aid Station commented after I posted originally:


That sure brings back memories.  I was the captain at Millard the …
4 comments
Read more
More posts